In Darkfall: Rise of Agon, your skills and stats are leveled by simply using them.  If you want to level your swords skill, swing a sword at a monster.  If you want to become a better archer, shoot a bow.  Your attributes (Strength, Dexterity, Vitality, Wisdom, Quickness, and Intelligence) will level up passively as you use associated skills.  For example, mining will raise your strength and vitality while casting magic spells will raise your intelligence.

You will want to complete your starter quests you receive from the councillor and other NPCs in your starting town early on. These have a nice reward called Nectar of the Gods which boosts your stats very quickly at low levels (up to stat level 25). 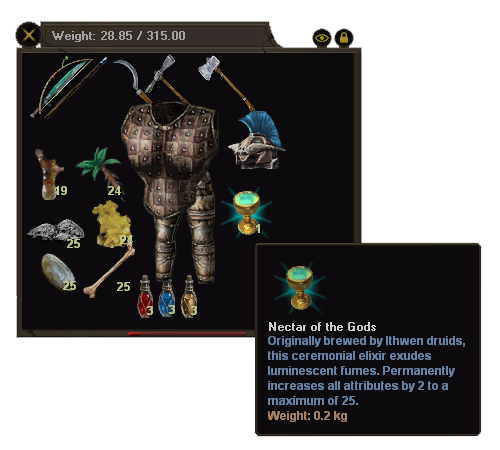 Scribing is a skill that allows you to craft spell scrolls and skill books. These can be consumed to as an alternative way of increasing your skill level in a particular spell or skill. Certain spells such as buffs can only be leveled through the use of the associated spell scroll. Magic essences are required to craft these items and can be found off of monsters.

You start with Lesser Magic only spells. In order to unlock the next magic school, Greater Magic, you will need to reach 50 Lesser Magic. You can do this by casting your Mana Missile at enemies which is bound to 4 on the hotbar by default. To heal yourself cast Heal Self which is bound to 5.

10 Magical Schools to be Unlocked

Once you reach Greater Magic rank 50, you can purchase elemental magic school such as Fire and Water. You can purchase new spell schools and the magic within them from Mages in NPC cities, and in player cities where Mage's Guilds have been built.

Meditation can be accessed through your Journal in the User Interface navigation bar:

Meditation is used to passively level up your stats or skills and works both online and offline. Meditation points are earned in bulk early on by completing your starter tasks (access by pressing “J”), as well as many quests you will find throughout the world such as in dungeons. They can also be purchased with gold if you need more later and you have exhausted your early points. You will want to start your meditation as soon as you enter the game. 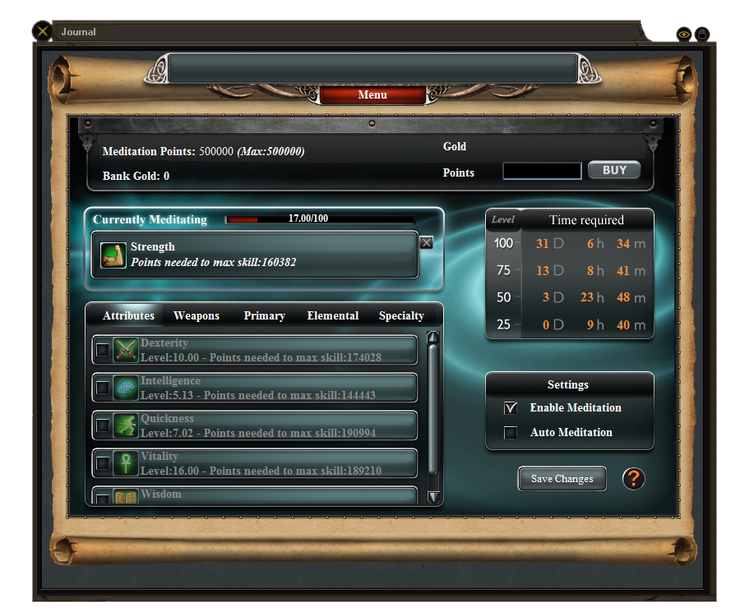