Player interactions have consequences, and this guide will teach you the basics of what to expect in the world of Agon. When you hover over another player, their name will appear in one of several gradients of red or blue, depending on their alignment. An individual's alignment can range from -1000 to 1000, and players will begin the game at 200. You can find your own alignment by looking underneath your vital bars as shown below:

Characters who are in positive alignment are considered "blue", and players who are in negative alignment are considered "red". Only blue players are allowed to be in starter zones and racial capitals. Guard towers will attack any red or grey players as soon as they near these cities. These towers are very dangerous and will most likely kill anyone in a matter of seconds. Even with these towers, keep in mind that no place in the world of Agon is 100% safe!

There are both Lawful and Lawless areas throughout the lands of Agon. Clans and alliances can decide the alignment status of the territory that they own (with requirements needed to set their lands to lawful status), but many areas outside of NPC cities are lawless by default. As you make your travels you will be notified of whether or not you reside in a lawful or lawless zone.

Benefits of Being Blue

Players who are blue are free to travel throughout the NPC racial areas and visit all of the capital cities and starter towns. You will be granted a Capital Recall (found under your mini map) which will allow you to bind to your race's capital city. This provides you access to high level skills and is a good location for trade.

Be very mindful of friendly fire in NPC cities and in lawful areas, as accidental hits can flag you grey. With that said, there is a safeguard against accidental hits while near starter and capital NPC cities. By default this button shown below will show "Hit Protection Enabled" which means most of your standard attacks and spells will not damage blue players near NPC starter areas. 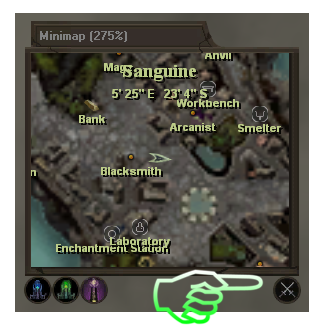 Killing or ganking blue players in a lawful area will result in you losing alignment, and if your alignment drops below 0 you will become "red". Performing any negative action on a blue player in a lawful area can also flag you "rogue" or "grey" for a short duration. The same thing occur for players who help other reds or greys in these same lawful areas.

Players who get off of their mounts will leave 36 seconds of mount ownership on them which will be shown when a player targets their mount. Any player that jumps on a mount that has ownership over it will automatically be flagged grey, so make sure you pay attention while in NPC areas or else it may cost you your life!