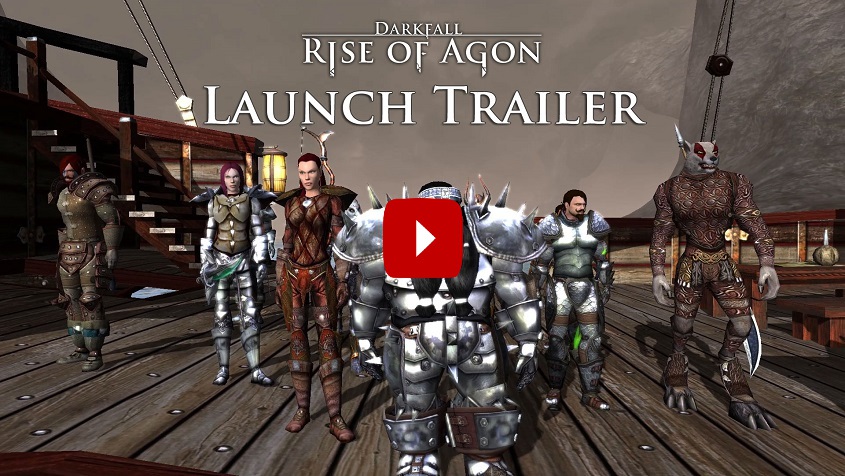 We are releasing our cinematic launch trailer that was made from footage taken from Early Access events with our community. We would like to thank everyone who helped us out during these events and we hope you enjoy! For those of you wanting a link to the newly composed song for this trailer, made by our composer George, you can head to here!

Also make sure to take a look at our "What is Darkfall: Rise of Agon?" video if you have not seen it yet, which provides an overview of what to expect in the world of Agon. For those of you who are returning players, you can use this to show others what Darkfall is all about!

Throughout our pre-launch development phases there were over 22 patches implemented into the game. The focus has been on addressing many of the core issues that remained from Darkfall Online along with enhancing and expanding on various aspects of the game. We put together a new webpage that has all of our patch notes compiled that you can read here, but the following outlines some of the most impactful ones:

We recently updated our official website and added a couple of new pages, including our New Player and Veteran pages along with our Compiled Patch Notes. We also released our new store and packages today that include both our gametime and Nithron coin packages.

All store packages are currently available at a discount of 10% off the price they will be at launch. Once the game goes live on May 5th, these packages will return to their standard price, so make sure to take advantage of this offer while it is available!

Please note that all game time that is purchased will be added to your account balance, on top of any current playtime you may have from Founder Packs!

We have officially opened up our name reservation service to all of you that purchased a Legend Pack during early development. This service can be accessed by going to your Account Page on the official website.

It has been almost two years since Big Picture Games formed from the ashes of the Darkfall Online community. Our goal has been to not only bring back the Darkfall franchise, but raise it to new heights and unleash the potential it always had. Darkfall: Rise of Agon is aimed to provide the best sandbox MMORPG experience on the market by providing the most intense and exciting combat available and a true sandbox game driven by risk vs reward and character freedom.

We look forward to seeing you and your friends at launch and hope that you will help us spread the word! All of us at Big Picture Games would like to thank each and every one of you for your support throughout this amazing journey and we cannot wait to see where the future takes us.

Join us in the discussion!