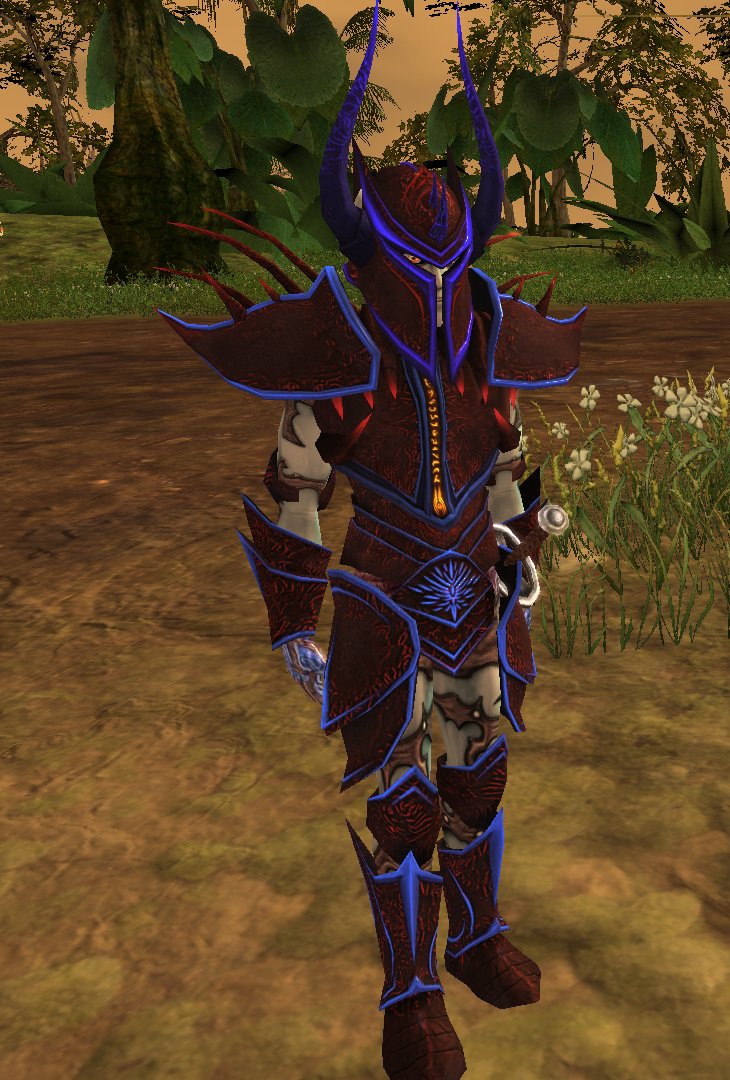 Today we're going to showcase a little bit of what we're working on that's nearing completion in the next patch currently in development and also a few teasers of what the team is working on behind the scenes.

QA has finished going through the initial rundown of the dye system and while most pieces passed there is a bunch of touchups and cleanup to do in this system. We decided to create a system that would apply a colour change to the existing asset instead of making new models with all the dyes so that we have a system with tons more options and we don't have to create 120 new assets(10 armour pieces, 6 races, 2 sexes = 120 separate asset files per armour set!) every time we want to add in a colour. This has presented challenges that we've addressed with various adjustments to the system and shaders as there is multiple types depending on the material for the armour. It's starting to look pretty good we're getting very happy with it now that it is getting dialed in. 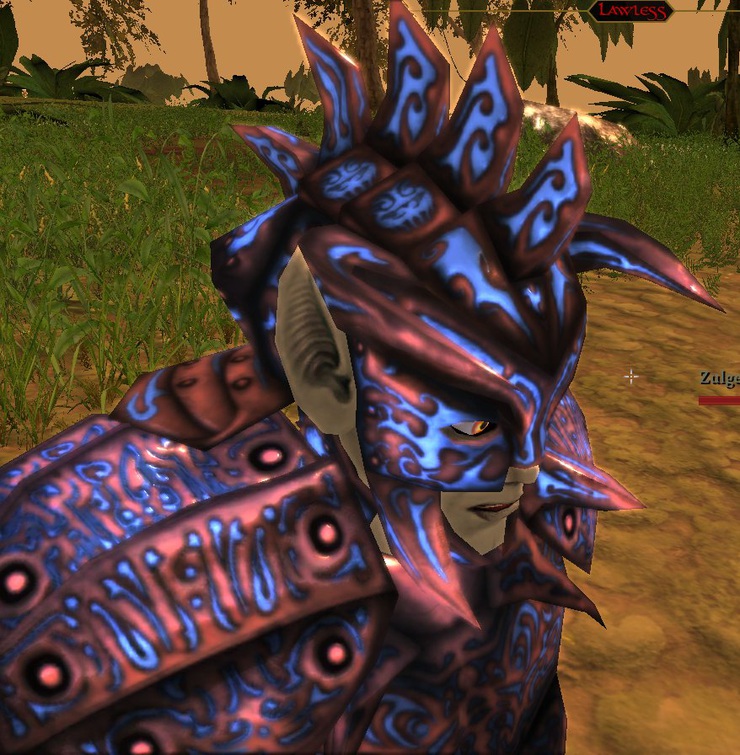 Research system is nearing completion and the functionality is being tested on our internal server by QA. TJ threw together an initial GUI for testing but this is the basic window we're working with. The system will allow you to place in crafted items to be able to be researched which will consume durability until it is destroyed. The amount of experience you receive from an item will depend on the rank of the item and the research time is based on durability. A blueprint interface is coming using a new blank blueprint from scribing that will allow you to convert an item into a research blueprint. Once you create a research blueprint for a designated craft you can then input it into the research queue. Research works online, offline and continues uninterrupted even when the server is offline for maintenance. Below is a screenshot of the new tab basic layout: 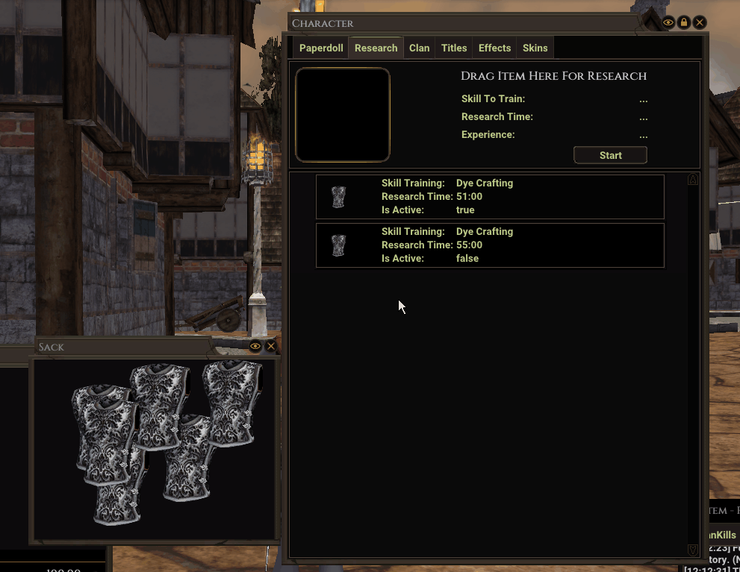 One of the quality of life additions players have asked for is a way to grab ammo, regs, etc out of the bank more quickly to restock. We've got a new tab added to the bank that will allow you just that! You can select the amount you want to retrieve and double click a reagent to pull it. This will make restocking arrows and regs very quick and easy!

One of the changes of this patch is to consolidate all players to one starting area which is going to be humanlands. This is being done for a few reasons and one of them is this will allow us to script the starting much better with a single area as well as have one area for newbie protection. Part of this patch is going to be a redesigned tutorial to better guide players initially as they get into the game and players will start right into the action. All starting quests are available in humanlands for all races to do, existing quests have been left for now in the other 5 racial areas minus the new player quests in the old starting cities. Right now we have new characters spawning in Monkfield but the plan is a new area we're building which will act as a new player "boot camp".

The next thing which is active in the development queue is the creation of a 3 zone system within Agon for the freedom of players to choose their level of risk.

Blue Zone: This zone will include all of Humanlands and if you are blue and have the right PvP flag selected you will be safe from losing loot. This change will foster a breathing space for players who choose to not engage in non-consensual PvP. With the lowest level of risk there is also the lowest quality/amount of resources available in this zone.
Yellow Zone: This area will include the racial lands on the main continent except human lands. In this zone there is partial loot drops from your backpack but your equipped items in your paperdoll at the time of death will remain with you when you spawn. Moderate to high level resources will be available in this area with medium risk.
Red Zone: Lawless area including the centre of the map area, chaos cities, sub continents and oceans(the majority of the world!). Rules will be as they are now with all players dropping all items in their backpack upon death. The most powerful items and rarest materials can be found in this area which coincides with the most risk so there is the most reward.

Incapacitation in Blue and Yellow Zones will become a "Revive" timer as your character will revive upon the bar filling up instead of bleeding out as you do now. Upon incapacitation some of your items will drop in the Yellow zone allowing players to "mug" someone and choose to take the full alignment hit by ganking or simply taking the dropped items and a partial alignment hit by letting the player get back up.

With the changes coming in for the new starting zones we're going to remove Newbie Protection as it won't be needed anymore with the new system in place. Hit Protection is going to be removed and replaced with a PvP toggle that will have 3 settings:
No PvP - Cannot hurt other blue players in Blue/Yellow zones. This will be the default setting for new characters. This will also prevent you from moving players with physics abilities or being moved by players with physics abilities in the Blue Zone.
Consensual PvP - Can be attacked without alignment loss by other players who have Consensual or full PvP set. You will drop items outside the blue zone. This mode will allow you to show you are willing to PvP but are still lawful and not killing blue players not wanting to PvP.
Murderer - Can attack any player anytime regardless of their PvP flag. Will take alignment loss and get murder counts causing you to go red. Red or grey players will drop loot in all zones regardless, being red or grey can only be achieved by way of non-consensual PvP on the main continent lawful areas. We'll touch more on the changes related to alignment and murder counts in a future update.

For all those water aficionados out there Arpad has been working on a few water improvements including waves, shorelines, rivers and waterfalls in his mission to modernize the game's graphics capabilities. These improvements will continue to go in as they are completed, here's a few teasers Arpad shared with the team recently:

Hope you guys enjoyed this update, join us in the discussion and leave your feedback!