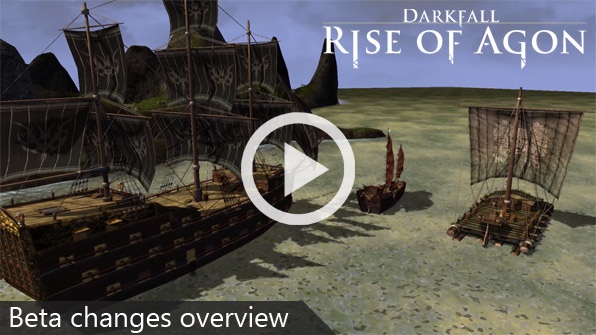 The team at Big Picture Games is happy to announce that on Friday, August 5th, 2016 the Closed Beta development stage of Darkfall: Rise of Agon will begin. Upon server opening our new security enhancements will be implemented along with our first game design patch named Low-Development/High-Impact 1 (LDHI 1). This patch includes many updates to the User Interface, New Player Experience enhancements and Quality of Life changes. The following video goes over some of these changes for your viewing pleasure:

To allow us to gather as much feedback as possible on these initial changes, and to compensate for us moving directly into Closed Beta, the first 14 days of Closed Beta will be free to all users. After the free period ends on August 19th, 2016, anyone with a Founder Pack will have full access to the remainder of this testing phase.

Detailed patch notes of LDHI 1 will be released the day the servers go live, and we are eager to see the feedback from your testing. Here is a quick preview of some things to expect:

We are excited to have you join us during this phase of development as we shift our focus primarily to game design changes and client enhancements.There are many things we have in our pipeline that we are working on and will be continuously updating the game throughout Closed Beta. We look forward to your valuable feedback during this phase of development and would like to thank you for all of the support as we prepared for Closed Beta.

The Team at Big Picture Games