Agon's northeastern continent is a place of stifling heat, lush vegetation, and heavy rains. Here, the jungle slowly reclaims the cities of a fallen culture, whose destroyer now slumbers within the walls of an emerald-clad citadel. Mindless of this, some of Agon's most terrible monsters prowl the forest depths in search of prey.

Jungle-drowned ruins bear witness to a lost age, in which Yssam was inhabited by a race of elves called the Ithwen. Unlike their present-day relatives, the mirdain and the Ciel Fey, the Ithwen built houses of stone and had no special reverence for nature. The ruins they left behind bear witness to an advanced civilization.

Compared to the Chaldean ruins of Agon's mainland, Yssam's ruins are recent. All the Ithwen cities were abandoned at the same time, approximately eighty years ago, and they all bear the marks of monstrous rampage. Towers have been torn down, houses are fire-scorched, and the claw-marks of a giant reptile are omnipresent.

Overgrown and moss-covered, the bones of countless dead elves still lie where they fell many decades ago. Some fell in combat, inside cities or on now-overgrown fields, while others were struck down while fleeing desperately. Many of the partially shattered skeletons are blackened by long-extinguished fire.

The Ithwen civilization was destroyed by Far-Loradain, who once called Yssam his domain. He is an incredibly old and powerful god. His motives for leaving dream-sleep and attacking the Ithwen are unknown.

Far-Loradain is served by a mysterious clan of powerful warriors and spellcasters. They dwell in a citadel at the heart of the continent, within which the entrance to Far-Loradain's abandoned lair is located. In the northeastern corner of Yssam, in the shadow of a large volcano, stands the giant fortress of Iyrtan the Destroyer, an Erodach who has established himself as the king of a loosely organized Fire Giant realm and has since been seen on Rubaiyat. Irytan’s motive for departure remains a mystery. 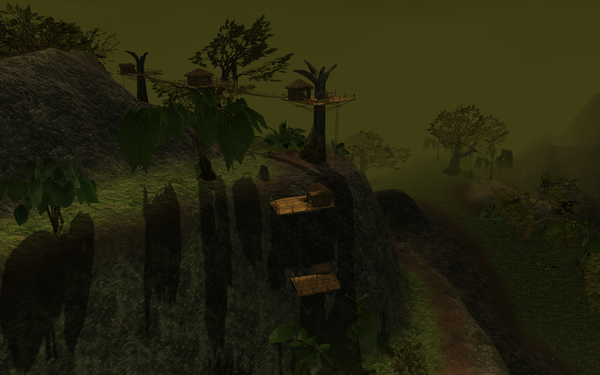