For thousands of years, the Angra flowed across Rubaiyat. She nourished life with water, she carried ships on her broad back, and she ground down mountains to make farm-soil for her people.

To the Sharjad people, the Angra river was eternal and unchanging. Her daily gifts were as certain as the rising of the sun, and her flood-cycles were as divinely fore-ordained as the coming of spring after winter. But one day the inconceivable, the cosmologically impossible happened: Almost overnight, the Angra simply stopped flowing, and the farms, river barges, and cities of the Sharjad lay stranded along with the sad, dried-out husk of their provider.

Meanwhile, a red, rune-covered pyramid rose slowly from the pit which once housed the Angra's heart-spring. As the ancient structure rose, its architect bid his long-buried followers rise from out of the desert sands, to conquer Rubaiyat once again.

The Return of the Pharaoh

During the Usurper Wars, a powerful deity established himself as the God-King of Rubaiyat, calling himself Ur-Khamset, or the Red Pharaoh. He slew or imprisoned the local deities of the desert continent, subjugated its people, and then began shaping his subjects into a powerful army with which to contest the rulership of Agon and force access to the Halls of the Goddess.

Ultimately, the Red Pharaoh was defeated by an alliance of rival gods. But as he expired, the Red Pharaoh cast one final, terrible spell which drained all his human subjects of life and liquid, leaving only skeletons to be buried by the desert. Thus Ur-Khamset took his people with him into apparent oblivion, leaving his conquerors with nothing but bone-strewn ruins to rule.

Unbeknownst to all, Ur-Khamset had foreseen his demise and prepared for it by constructing the Red Pyramid at the bottom of Lake Angra. He imbued the pyramid with spells that would summon and preserve his own-life force at the moment of death, and then resurrect him when the stars were right for his return.

As the Red Pyramid rose from the lakebed, a thousand bony hands clawed their way out from under the accumulated sands of millennia. Gathering in Rubaiyat's trackless deserts, the Red Pharaoh's hordes swept down upon the cities of the hapless Sharjad, conquering them with ease. Already, the Red Pharaoh's winged snake standard flies from the battlements of most cities on Rubaiyat's mainland.

While most of the Pharaoh's marauding, sand-tinted skeletons were once human, a few clearly belonged to the strange giants known as the Avaris, who still roam the deserts of Rubaiyat. Though some skeletons' clothing and equipment has decayed into nothingness, most still wear the exotic, ancient garb which they wore in life, and wield sensuously curved, outlandishly decorated bronze weapons.

Ur-Khamset himself still dwells within the Red Pyramid, commanding his armies using necklaces called Sun Ankhs which are worn by his most powerful generals. Though nobody has accomplished this potentially suicidal feat yet, it has been theorized that an adventurer wearing a Sun Ankh would be able to enter the Red Pyramid. 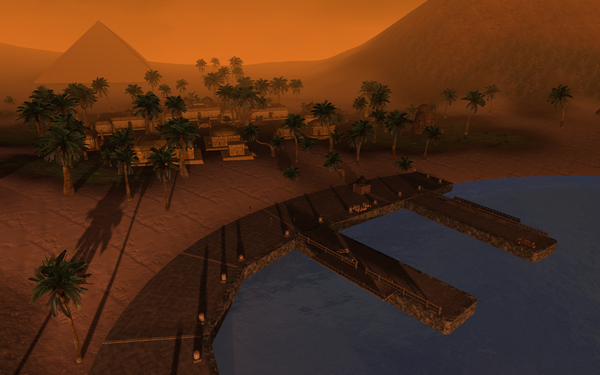