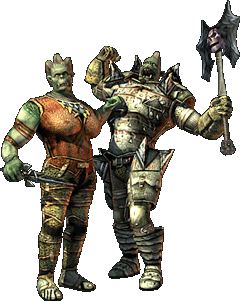 Marching under the banner of their goddess, Ashaka, the armies of the orks are constantly on the march, forever seeking new cities to raze, new nations to conquer, and new people to sacrifice or enslave.

To the orkish warrior's mind, excessive planning is a coward's resort, while fancy tactical chicanery is a sure sign of effeminacy. Instead, orks rely on a combination of unrelenting aggressiveness, death-defying bravery, and the natural-born bully's instinctive eye for weakness.

While their behavior might seem erratic and irrational to outsiders, the orks themselves see every battle, every sacrifice, and every torched village as steps on the road to the Big Burning, an ork-administered apocalypse in which Agon is scorched clean and made ready for the reign of Ashaka.

Orks see most other races as little more than sources of income, sadistic fun, and sacrificial victims. The only other race that the orks are on good terms with are the mahirim, who they respect for their bravery, cunning, and skill in battle.

The orkish realm lies in the central-eastern part of Agon's main continent. A state of unending war exists between the orks and both of their closest neighbors - the humans of Mercia to the south, and the dwarves of Dvergheim to the northwest. To the northeast of Morak lies the jungle continent of Yssam, a region full of savage predators, some of whom sail to Morak in futile efforts to capture orkish cities, while the neutral city-state of Silvertown lies to the southeast. To the west, the Pall of Oncylus slowly spreads across Agon's heartland.

Much of the orkish homeland is covered by fetid and insect-haunted swamps, in which the traveler sinks ankle-deep in sticky, ubiquitous mud. Rain falls very frequently in Morak, and a combination of clouds and swamp-mist ensures that sunlight rarely - if ever - disturbs the murky ambiance. The northern third of Morak is dominated by several active volcanoes and the lava streams which issue from them. The land between these volcanoes is jagged, rocky, and as barren as the southern swamps are fecund.

Lava rivers cut through and encircle the orkish capital, which lies in the shadow of an eponymous active volcano. Minor eruptions of Flaming Skull are frequent, and the rain of ashes has recently grown so thick and steady that the sun is pleasantly (to orkish eyes) veiled by a black, noxious cloud. The orks welcome the increased volcanic activity, regarding it as a sign that Ashaka will roam Agon once again.

Close to Flaming Skull lie three starting villages, which is where orkish adventurers embark on their careers. New Flayed Elf is a large port community, watched over by a lighthouse and a coastal keep. Metal Heart lies on an island surrounded by deep swamp while Chopping Necks stands on a series of interconnected pillars that rise from a lava lake.

Orks see themselves as purely a warrior race, and all manual labor in Morak is performed by slaves. The majority of these unfortunates are goblins, but a sizable majority belong to a clan of svartdvergir who were enslaved after migrating south from Dvergheim.

The orks worship the goddess Ashaka, a war deity of awesome power, who quite recently unified the warring orkish tribes under her rule. Previously resting inside the Great Stairs in Flaming Skull, Ashaka ruled through Grand Messenger Arxanthos, a red dragon who receives dream-decrees from the slumbering goddess (or just claims to do so), and who commands a sinister priesthood called the Dragonbound. When Ashaka is ready, she will emerge to take control over a united orkish army, and together they will unleash the Big Burning upon the world. In the meantime, the orks - who can hardly wait - do their best to prepare the ground for this rampage to end all rampages.

Big Head Uzrok commands one of the most active armies on Agon, and the Iron orks are an elite group within that army, its members selected for strength, ferocity, and cunning (in that order.) Utterly loyal to Uzrok, the Iron Orks answer to the Big Head directly, and some speculate that building their strength is the gambit in a scheme to wrest power from the Dragonbound.

Defenders of the Swamp

The Defenders of the Swamp are an orkish order of knights who have dedicated their lives to keeping the swamps of Morak clean of unwanted elements. Since Morak has no shortage of monsters or enemies, the Defenders are kept busy indeed, and their membership tends to attract orks that are even more fond of violence than most.

The Dragonbound are an extremely powerful group of fundamentalists, who have dedicated their lives to Ashaka, and who show their loyalty by cutting off their lips and covering their bodies in self-inflicted scars. The Dragonbound are not averse to working behind the back of Big Head Uzrok, who they see as a mere pawn (and an insolent one, at that) in the Ashaka's game.

How the orks see the world

"All hail Ashaka - bringer of death, destruction and orkish superma… sumepra... bestness. When Flaming Skull rages, Ashaka stirs, and since a waking goddess needs food, we must triple the rate of plunder immediately!"

"Raise your spears high, show no mercy to the other races. One day, we will rule Agon, all that will be left is the corpses of our enemies and the slaves we let live"

"The mud around your feet… the buzzing of a million little insects… the rich smell of rotting vegetation upon the wind… there are many places in the world, but no place beats the swamps of Morak."

"Though indubitably breath-taking, my own scintillating splendiferousness is a mere shadow of the supreme magnificence that is Ashaka. She dreams in her sleep, and those dreams are conveyed to me, her Grand Messenger: Arxanthos the Sublime, the Immaculate, the Chosen of Ashaka"

How others see the orks

"A band of mud-brained swamp-bullies, whose only defense from extinction is the disease-ridden awfulness of their homeland. Soon, the human armies will march north and clean out that stinking nest forever."

"Guided by the cruel cunning of Ashaka and her priesthood, the orks are becoming more than just a disorganized race of raiders and murderers. We should seek to destabilize the current regime by subtly encouraging the ambitions of Big Head Uzrok while supporting the delightfully reactionary policies of the Guild of Thugs."

"In a world full of weakling prey, the orks are distinguished by their great physical strength and near-limitless bravery. What they lack in shrewdness and predatory instincts, they compensate for with size and a wild-eyed enthusiasm that the lesser races find intimidating."

"Half-witted swamp vermin! Though we have no interest in their vile homeland, the alfar will still take the time to eradicate every living thing in it that is larger than a small lizard."

"Orks do not know how to build, only destroy. If it wasn't for their slaves, they would still be living in pathetic little mud hut villages scattered throughout the swamp."