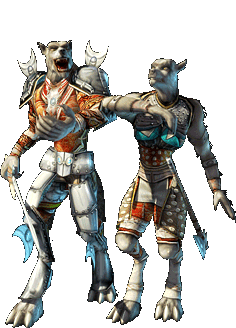 By the light of the Ghost Moon, mahirim packs strike deep into enemy territory, plundering and killing without mercy. They vanish as quickly as they came, leaving devastation in the wake of their lightning raids.

The mahirim are a fierce race of predators, whose society has only recently moved towards civilization. And while they may have cities and laws now, they retain the wolf-eyed wildness, the finely honed instincts, and the uncaring cruelty of their pack-hunting ancestors.

Given their warlike nature, the mahirim have a grudging respect for the equally warlike orks, who they see as strong and capable warriors.

The mahirim homeland is located in the Northwestern part of Agon's main continent. To its east lies the dwarven kingdom of Dvergheim, while the elven republic of Mirendil lies to the south. Across the Sarthan Sea to the north lies Niflheim, an icebound but resource-rich continent that is coveted by both mahirim and dwarves.

The Tribelands consists mainly of rolling hills interspersed with large forests of relatively sparse-growing, deciduous trees. The wilder regions are home to an abundance of prey animals, as well as large monster populations. Gnolls have always been common in the Tribelands, while a growing threat is posed by the Moon Cult, a twisted race of ex-mahirim humanoids who worship a demigod called the Moonbeast.

The mahirim capital sprawls across a chain of grass-clad islands within a lake in the central region of the Tribelands. With its low, wooden buildings nestled among tall autumnal trees, Red Moon gives an impression of being a compromise between the forces of nature and those of civilization.

Silverspear, to the west, is a well-defended town situated atop a circular plateau while overlooking lake Sarthain. Leenglow, to the north, is a large mining community that supplies the smithies of the Tribelands with much of the needed ore. Hunter's Moon, to the east, is a village located near some of the finest hunting grounds in the Tribelands.

In olden times the mahirim worshipped Theia, which is Agon's second moon, called the Ghost Moon. They saw their celestial deity as a goddess with many different aspects, including Theia as a warlike conqueror, and Theia as huntress and bringer of nature's plenty. In time, the mahirim began to worship a new goddess known as Midnight. The goddess of the hunt, Midnight embodied all the mahirim strove to achieve. Many believe she is the reincarnation of Theia herself.

Until quite recently, the mahirim were a race of nomadic hunters and raiders who carried their possessions with them between ephemeral seasonal camps. The ongoing development towards civilization was set in motion by a prophet-king called Amurran, who had a vision of the Tribelands as a modern and powerful nation-state. Though the prophet-king is long dead, his work is continued by the Elders of Red Moon, an organization whose power is felt everywhere in the Tribelands.

The Elders of Red Moon founded the Tribelands capital, and inspired by the works and works of the prophet-king Amurran, they then set about civilizing the primitive and nomadic mahirim. Their work continues to this day, as they seek to turn the Tribelands into a culturally advanced, militarily powerful nation.

The Wolfmasks are an order of elite warriors who serve as enforcers for the Elders of Red Moon. Named for their characteristic face-covering helmets, the Wolfmasks commonly deal with internal trouble in the Tribelands but are sometimes dispatched on occasional hit-and-run missions into enemy territory.

The Circle of Neith is a mysterious group that worships the blue moon Neith, claiming that it is the source of all magic on Agon. The Circle are spellcasters who take a special interest in magical items and ancient artifacts. Uncommonly for mahirim, they are also highly interested in the history of their own race and the world in general.

How the mahirim see the world.

"That which cannot defend itself should not be suffered to live. Weakness is an insult to the gods, and Theia bids us remove all weaklings from under her gaze."

"Since they are helpless to stop our raiding parties, imagine how our sickly neighbors would fare against a united army of the human. The day will come when such an army sweeps all before it, clearing the way for our rightful mastery."

How others see the mahirim

"Sit! Fetch! Play dead! They are not even fit to serve as our pets and will be put down like the scabby mongrels they are!"

"I respect the mahirim as hunters and as warriors, but their culture is despicably cruel and primitive. If they would but submit to mirdain teaching, we could civilize those simple-minded brutes."

"Of all non-orks, mahirim are the least pathetic and puny. In fact, orks sometimes ally with that noble race of predra... pedrato... hunters. If the mahirim is extra nice, Ashaka may even spare them from the Big Burning, hehe."

"To a mahirim, the world is a hunting ground full of prey such as you and me. They value nothing outside their own strange culture, and the only way to deal with them is by the sword."

"You can forget about your dragons and your gargantuas, the second most dangerous thing in the world is a mahirim raiding party. They are fast, agile, and strong, and they fight with the ferocity and cunning of born predators. What? Well, the most dangerous thing in the world is clearly an angry dwarf. Which is why you should shut up and buy me a beer."