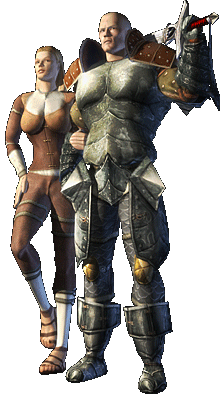 The earth-shaking under steel-clad hooves; a gleaming sea of blades, raised as one towards the sky; bright banners that invoke the might and radiance of Auros, the god of the noonday sun. Again and again, the knights of Mercia ride forth into the world, determined to shine the light of righteousness upon those who dwell in darkness or shadow.

The Mercians are natives of Riada, a sunken realm that lay in the great eastern sea, its spires gleaming each day with the rays of the morning sun. When this island home foundered, Mercian survivors landed on the shores of their present-day realm, which they conquered after a long war with an aboriginal people called the Imric. The Mercians see themselves as a divine race descended from the children of the sun god Auros, and they are at best unmindful, at worst disdainful of the needs and opinions of other, presumably lesser races.

The humans have good relationships with the mirdain of Merendil and the dwarves of Dvergheim.

The Kingdom of Mercia lies in the southeastern part of Agon's main continent. Beyond a war-ravaged no-man's land to the north lies the orkish realm of Morak, while the dragon-haunted Pall of Oncylus lies to the west. To the south, Mercia is bordered by the wasteland continent of Cairn, which is home to bands of giants and crumbling minotaur cities. In the ocean to the east lie dozens of pirate freeholds, the largest and most notorious of which is the free city of Silvertown.

The dominant terrain types in Mercia are light deciduous forests and gently rolling grass clad hills. A multitude of lakes and waterways also mark this outwardly pleasant land, such as the majestic Eanna river, which flows southward through the heartland before emptying into Sanguine Bay. Mercia's long coastline features countless islands, such as a shattered, sprawling archipelago which lies between Mercia's southern coast and Cairn.

The human capital lies in southern Mercia, not far from where the mighty Eanna joins her waters with those of Sanguine Bay. Built on the instructions of the nation's founding father, Duke John Malregard, Sanguine stands in an eminently defensible location, atop a broad plateau that dominates the surrounding plains. Despite such military concerns, the Mercian capital is a green and pleasant city, famous for its squares and expansive park areas.

All human adventurers start their careers in one of three villages that lie in the vicinity of Sanguine. Sandbrook, to the south, is a logging community which straddles the banks of a small river, and which lies amid the enormously proportioned ruins left by a mysterious race of giants called the Nithron. Heart of Eanna, to the east, is a large port through which much of Mercia's foreign trade passes. Monkfield, to the west, is a mining community which supplies much of the ore needed by Sanguine's smithies.

The Mercians worship Auros, a solar deity who they revere not only as the bringer of light and life but also as the father of their race. According to Mercian origin myths, Auros chose twelve wives from among the mortal races and brought them with him to the sacred island of Riada. Over the next twelve years, Auros fathered twelve children with each wife, and the resulting 144 half-gods became the ancestors of the Mercian race. Thus the Mercians believe, quite literally, that they are the progeny of their own god, and they see it as their filial duty to expand the reach of his light and teachings.

The Auran faith dictates that all life issues forth from Auros and that no matter how far from the light a creature has strayed, Auros will receive its life-spark after death. When killing a benighted or shadebound creature, Mercians believe they are sending it into the cleansing light of Auros.

Shortly after landing on the mainland, Duke John organized his finest warriors into a knightly order which would serve as the vanguard of his armies. Mounted on fierce and towering warhorses, the Knights of Malregard won countless victories over the Imric, and ever since they have remained the indomitable and warlike champions of the Mercian people.

The primary task of the White Order is to shine the light of Auros upon creatures that scurry about in darkness and shadow. Traditionally, this has meant embarking on military campaigns against benighted foreign peoples, such as the orks and the alfar, but recently the Order has been forced to turn its attention to internal threats, such as the Imric insurgency and the growth of the Twilight Empire.

The Sons of Riada are a group of Mercian traditionalists who believe that many secrets were lost when the home island foundered. They seek answers and artifacts in ancient ruins, convinced that the keys to global supremacy lie buried in the past.

How humans see the world

"What opposes the Blood Heirs of Auros? Insects. Like leaves, we brush them aside."

"Our swords are harbingers of the day which always follows night. Do not pity the darkling creature as you slay it, for only through death can its spark rejoin the light of Auros."

"Through the strength of our sword-arms and the divine blood in our veins, mankind is destined to rule. Under human lordship, Agon will enter a golden age of peace and prosperity."

"Have you ever wondered why Riada fell? Or why the whispers of Malaut hold such allure for certain segments of the Mercian populace? The answers to these questions, and many more, await discovery among the ruins of the past."

"Dwarves and mirdain are our noble allies, who have found their own way out of the darkness. If mankind is to retain the friendship of these races, we must respect their cultures and beliefs."

Agnar Shale, diplomat to the court at Charybdis

How others see the Mercians

"Oooo! I harbinger dawn... Oooo! I've got sun blood in my veins. Looks like you've spilled some of that precious blood all over my axe, human! Wheres your sun god now, eh? Hehehe."

"I will savor the look on humanity's collective face when the sun fails to rise and the world is plunged into Melek's eternal night."

"In vast herds, the noble human roams across the plains of Mercia. When they defend in numbers, humans pose a challenge for even the most experienced of mahirim hunters."

"One more word about lights in the darkness and I will be forced to start banging heads... My human clanmates are capable allies, but they tend to be more than a little full of themselves."

"Sometimes humans settle on a course of action without first considering all the implications, and once their minds are made up, there is no budging them. Since humanity is a young race, proper guidance from their elders and betters may yet learn them to temper their instinctive boldness with caution."

The kingdom of Vargash was one that existed, chronologically, alongside that of the Chaldean empire. It is difficult to accurately chronicle the history of this kingdom as the Vargashi never developed literature and a written language. What has been collected on this obscure empire is stories and lore that was passed down by word of mouth over generations.

The Vargashi bordered Chaldea on the west, claiming the plains and mountains of central Agon (what now lies under the Great Pall) as home. As no word of their kingdom exists before that of the Chaldea empire it has been surmised that Vargash arose from alliances of the barbarian tribes that refused to assimilate into the Chaldean culture and nation. Ballads tell of Ara, a warrior-chieftain of immense proportions who sought out barbarian chieftains of neighboring tribes and through sheer intimidation (and more than one decapitation) muscled them into joining under one banner. One folktale describes one of Ara's first negotiations with other chieftains.

It tells of a chieftain who demanded to know, "what makes a dog think he can lead the wolves?" Ara apparently replied, "his blade," and pointed out his own that leaned, gleaming against his chair. He then asked to see the other chieftain’s blade and, upon receiving it, reversed it and plunged it right through the other chieftains throat, pinning him to the chair. The tales finish with Ara apparently commenting "and being smart enough not to hand it away also helps..." Whether the tale is true or not, it seems that not many chieftains chose to decline Ara's 'offers' of unification after this.

The tales go on to speak of the rapid growth of the new tribal kingdom. They tell of the immense city of tents that grew on the plains north-west of central Agon and of numerous raids into Chaldean territories over through the coming decades. As no ruins have ever been discovered of the Vargash kingdom it is safe to surmise that the entire culture of nomadic tent-cities was never replaced by the more civilized concept of construction. Various small tidbits of information have been gleaned from the ballads and folktales that are still sung by the present-day Vargashi nomadic raiding parties. The ballads tell of sprawling tent-cities growing around the many oasis and hills around the present-day Tribelands. No mention has ever been made of developments such as agriculture or any sort of cultural advancements through the century that the Vargash kingdom grew. What information has been passed down consists of songs and tales about the numerous and constant raids into Chaldean lands and the growth of a slave-gladiatorial sport the Vargashi grew to enjoy. Every tent-city had large networks of arena pits where slaves of a little-mentioned race of wolf-like beings were forced to fight in elaborate contests to the death. This sport seems to have been one quite central to the Vargashi culture with slaves even traveling between the tent-cities to battle other Vargashi lord's slaves in inter-city contests.

In fact, the Vargash culture seemed to put great stock into this pit-fighting. Many tribes would gather to watch matches between favorites among the wolf-like slaves they kept and bred. Where these slaves originated is not known, it is assumed they originally must have come from the area the Vargash settled their tent kingdom into. It is known that when the Chaldean armies swept into the cities to put a decisive end to the Vargashi raids, the slave-race, finding themselves without masters for the first time in hundreds of years, melted back into the mountains and forests of the area.

Much speculation has come out of this one fact, as centuries later this land is where the human civilization has made its home. However, human officials have declined, often quite violently, in making any comments on a possible connection and there is no concrete human history before the coming of Amurran the prophet-king.

Following the Chaldean 'cleansing' of the Vargashi lands, many of the barbarians fled across the channel to the continent of Niflheim where they still reside today. Small groups of nomadic hunters and raiding parties will often be encountered. There they maintain a very tenuous and unspoken treaty of mutual tolerance to the xenophobic Snow-Clan dwarves of the icy continent.