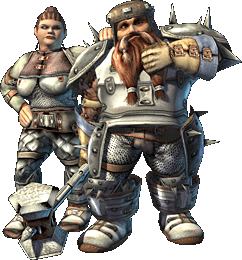 Like axe-bristling avalanches, dwarven legions surge across Agon's battlefields, neither wavering nor resting until victory is secured. At any stage in any battle, no matter how ridiculous the odds may be, dwarves believe - with unblinking certainty - that they will prevail through superior skill, rock-hewn strength, and indomitable bravery.

Today, the dwarves are nearing the final page of the book of instructions, which is said to contain a special task that Ymir believed the dwarves would only be ready for after 20,000 years of preparation.

Grim-faced, iron-strong, and unshakable in courage and convictions, dwarves are trueborn children of the mountains. They are an introspective and taciturn race who scorn all gods in preference of a multi-millennial path to perfection that was laid out by the legendary founder of their nation.

The dwarven homeland lies in the central northern part of Agon's main continent. Beyond its western borders lie the mahirim Tribelands, while the orkish nation of Morak lies to the east. To the northwest, across the storm-blasted Sarthan Sea, lies the ice continent of Niflheim, where dwarf clans have long struggled for supremacy with mahirim forces. Currently, however, all settlements on Niflheim face a grievous threat in the shape of Illgarm, a demon whose campaign of conquest seems unstoppable.

Dvergheim itself is a hilly region, where glacier-fuelled rivers have carved narrow valleys through towering, snow-peaked mountains.

The dwarven capital lies within an enormous, dwarf-made cavern, deep under the jagged peaks of central Dvergheim. Its name derives from a huge rock formation in the center of the cave, where clusters of stalagmites and stalactites have joined to form a gargantuan, vaguely tear-shaped pillar that reaches all the way from floor to ceiling. A tamed river encircles Ymir's Tear, driving the wheels of its forges and factories.

Near Ymir's Tear lie three villages in which dwarven adventurers used to start their careers. Hammerdelve to the north is a heavily fortified army stronghold that lies in the middle of a scenic mountain lake. A river of lava runs through Valfather's Edge to the southeast, and its forges are the only place in the world where the famous dwarven Ildhammers may be made. Eirhjelm to the west is famous for both its rich mines and its beautiful scenery.

The dwarves follow the teachings of Ymir, a legendary master smith who forged many of Dvergheim's greatest wonders, as well as the nation itself. Ymir spent his final years writing a book that laid out a detailed, step by step plan for the next 20,000 years of dwarven civilization. Ymir's teachings told the dwarves what to strive for, what to practice, and what to create, and he told them how and when they should approach each task.

Ymir's goal was to create a perfect race and a perfect nation for them to live in. Today, the dwarves are nearing the final page of the book of instructions, which is said to contain a special task that Ymir believed the dwarves would only be ready for after 20,000 years of preparation.

The Voice of Ymir is a sprawling bureaucracy dedicated to ensuring that Ymir's commands are interpreted correctly and that the dwarves stay on his Path. Currently, the Voice is being hijacked by the ambitious King Sigurd, who secretly cares little for the Path, but who wishes to use the bureaucracy (and its large corps of engineers) for his own purposes.

Order of the Axe

The Order of the Axe are knights sworn to remove all obstacles to the racial progress of the dwarves. The agents of this semi-official Order also deal with rogue dwarves, and they are frequently sent on missions behind enemy lines.

Oldest and wealthiest of the dwarven merchant houses, the Five Beards Trading Company sends traders, explorers, and caravans to all but the most obscure and dangerous of Agon's regions. For centuries, Five Beards has enjoyed a near-monopoly on trade with Ymir's Tear, but in recent years, King Sigurd has opened up the market for competition. As a result, Five Beards is looking for new markets in which to profit.

How the dwarves see the world

"Celestial dragons in Yssam; Illgarm's conquests in Niflheim; and the rise of that damnable mage Synochus in the heartland... What goes on beyond Dvergheim's borders should not concern us overmuch. We must maintain an ironclad focus on Ymir's Path."

"We act as one, work as one, and strike against our enemies like a single, unstoppable storm blast from the mountains. The strength of the dwarves comes from our monolithic, eternal unity."

"They may be an arrogant bunch of pointy-eared poseurs, but the mirdain are valuable, battle-proven allies of the dwarves. Though they prance about in forests during peacetime - pollinating flowers or whatever it is they do - the mirdain can always be trusted to act swiftly and decisively against our shared enemies."

"The humans are sometimes led astray by the manipulations and cod-prophetic cackling of their much too powerful priests. That said, they are an industrious and resourceful race, whose formidable armies are Agon's second strongest bulwark against evil. When a large group of Mercian knights thunders across the battlefield - hundreds of pounding hooves raising an infernal roar - it is almost enough to impress a dwarf."

How others see the dwarves

"The dwarves have achieved much through sheer, bone-headed perseverance, but now is the time to lay down that pickaxe and think things through. Already valuable allies, their battlefield performance would improve further if they assumed their natural place in the chain of command - as brave soldiers led by brainier, more tactically astute mirdain officers."

"For thousands of years, the dwarves have obediently followed the schemes of history's greatest control freak. They bring that same unthinking, bloody-minded determination to the battlefield, and a dwarven legion is a force to be feared by anyone. As individuals, dwarves are honest, fearless and utterly dependable. I would trust my dwarven clanmates with my life."

"Filthy maggots who have crawled out from under some northern rock. The dwarves are pathetically naïve bearded morons, who will be outflanked, out-maneuvered, and outfought by the alfar as we cleanse the world of their sweaty presence."

"The dwarf is good in a crowd but separate him from his flock and he becomes quivering prey, ripe to be butchered by physically superior mahirim warriors."

"Oops, I didn't see you there, little fellow. Dwarves always make me laugh with their angry faces and stunted hairy bodies. Magnin... Maganimou... Nice in victory, we will allow the surviving dwarves to slave in our mines after the Big Burning."