The southeastern continent of Cairn is dominated by arid, viciously sun-scorched plains that are strewn with shattered and twisted rock formations. The plains are tortured by winds that blast mercilessly across the flats, howling around the jagged stands of rock. Tornadoes and dust devils spawn in the scrublands, and wild, rainless electrical storms dance across the blasted plains.

Land of Minotaurs and Giants

In ancient times, Cairn was home to the aernar, a peace-loving and deeply religious people, who lived in scattered adobe villages, eking out a living from the barren land. 290 years ago, however, minotaurs began arriving from Ochre on the mainland, and one after another the aernar villages fell to the fierce invaders.

The conquering minotaurs still inhabit the aernar settlements, but today unmaintained the villages are little more than inhabited ruins. The minotaurs focus their energies on waging war, upon each other and upon Cairn's other inhabitants, while staging regular raids on the mainland coast.

The minotaurs regularly crash with equally warlike Hill Giants, who roam Cairn's interior in small clans. Nomadic by nature, the hill giants build temporary camps and wind-shelters using whatever rocks and boulders that are available when a chieftain decides that a camp should be set up.

In the center of Cairn lies the dried-out basin of a large lake, and on its dry shores stands legendary Kasdim, a large and well-preserved Chaldean city. Though it appears tranquil from a distance, Kasdim is home to large populations of powerful monsters, who are engaged in a struggle for control of the city and its secrets.

When their empire fell, a handful of powerful Chaldeans managed to flee to Kasdim, which was then little more than a fortified trading station. There they remained, the last custodians of the Benevolent Empire's culture until the climate changes dried out the lake and rendered Kasdim uninhabitable. Before fading into oblivion, the last Chaldeans hid their books and artifacts in an exceptionally well-guarded dungeon, the entrance to which lies in the center of old Kasdim. This dungeon, and its treasure hoard, is the prize over which the monster factions fight. 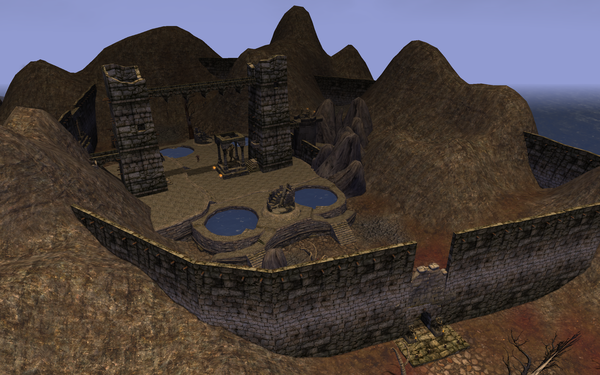