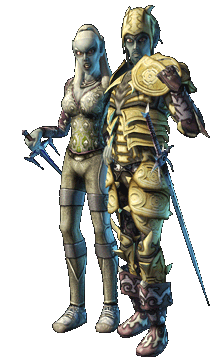 No trace of kindness exists in the world of the alfar, a race whose minds were shattered and then erratically rebuilt by a cruel and insane deity. To the alfar, pleasure is derived from the suffering of others, and the only impulse that can override their urge to torture and destroy is a marrow-seated need to please their God-King.

Like poison darts, alfar night raiders strike deep into the lands of the foreigner. Appearing out of nowhere, they cut bloody swathes of death and destruction, before vanishing just as traceless as they came. To their victims, it seems like the night itself shapes the alfar, then dissolves them again when their butcher's work is done.

The alfar feel a deep-seated hatred for all other intelligent forms of life, and it is difficult for them to enter even the most temporary of alliances with members of other races.

The alfar homeland lies in the southern part of Agon's main continent, with the human realm of Mercia to its east and the mirdain Forest Republic to the west. To the southwest, across the Ruby Sea, lies the desert continent of Rubaiyat. To the north, the Pall of Oncylus spreads across Agon's heartland, threatening to devour everything around it, including the northern regions of Nagast.

Much of Nagast consists of cragged badlands where huge mushrooms and black-leafed trees grow among broken rocks and spire-like mountains. The spell-irradiated soil of Nagast has a purple cast to it, and little that is edible grows in it.

The alfar capital lies along the shores of a large, maelstrom-wracked underground lake called the Throat, which is fed by a waterfall cascading down from the ceiling and by two swift rivers which flow in from neighboring caverns. No water can be seen to escape from the wildly churning lake, which is assumed to be connected to some unexplored lake system deep within the heart of Agon. Though many have been thrown into the Throat over the years, none have ever returned to report on what it feeds into.

Alfar adventurers once started their careers in one of three towns which lie in the vicinity of Shoal. Ongral, to the west of the capital Shoal. Near the town lies one of the largest swamp craters, filled with ruins of a long-forgotten race. Deep Yishku, to the north, is the largest town. Two-thirds of the town are built inside a dense cave system, making it well-defended. Alathos, to the east, is also mostly built inside a cave system, making it well-defended also.

The will of Melek is the only law in Nagast, and though his edicts may seem contradictory and strange, all alfar do their utmost to follow them, often without any explanation whatsoever. Even though he is quite insane, Melek is a brilliant strategist, who immerses himself in ambitious long-term plans for the alfar race and for Agon in general. In fact, his work on these schemes tends to engross him completely for long periods of time, leaving the alfar to their own administrative devices. Since many alfar refuse to recognize any other authority than Melek, alfar society tends to be strife-torn and fractured during Melek's retreats.

Melek has no use for the inept, the slothful or the merely competent, and Nagast society revolves around a constant process of god-controlled selection, in which the strong and resourceful thrive, while the weak or stupid are weeded out and killed. Melek's program of eugenics is the chief responsibility of the Horned Circle priesthood, who are intimately familiar with his criteria for selection.

Temple of the God-King

The Temple of the God-King is a potent weapon at the command of Nagast’s priesthood. It is a task force consisting of utterly loyal alfar, who were chosen for the Temple at a young age. They are dispatched to remove threats to Melek and Nagast, and they answer to the Horned Circle. Members of the Brotherhood are trained in a broad variety of combat-relevant skills, with special focus on close combat and healing magic.

The Unseen Radiance is a group of Deathless Mages who have served Melek since the dawn of alfar history. Though quite loyal, their necromantic pursuits and obsessions sometimes lead them down strange paths that lie beyond the ambitions of the God-King. In periods of Melek's Retreat, they sometimes work quite openly on furthering their own depraved agendas.

Named for one of Melek's most prized possessions, the Harn Mandean is an order of knights dedicated to the annihilation of Melek's enemies inside Nagast, such as monsters, severii and the slave army which currently threatens to plunge the nation into anarchy.

How the alfar see the world

"Melek will suck the sun out of the universe and pluck the stars from the firmament. The pitch-black night of his creation will last forever, and it will be hell on Agon for all but the alfar."

"The night is like a veil around our silently moving shapes… The lights from a plump, dozing village just ahead… The smell of freshly spilled blood and burning thatch…There is nothing else in life that can compare with the joy of a successfully staged raid."

"human dogs, orkish swamp rats, human dung eaters, dwarven maggots who gnaw at the roots of mountains... in the end it makes little difference - they are all soft, and their lands are ripe for plunder."

"Melek's will is the whole of the law, and the whispers from him are the only commands I follow. So-called priests who try to tell me what to do will die for their insolence."

"We alfar are an embattled race, alone in a world full of loathsome enemies. If we face this hateful world as individuals we will surely fail, but nothing can stop us if we stand together."

How others see the alfar

"Though it saddens me to say so, Melek's corruption runs so deep in the alfar that they are beyond redemption. A world cleansed of alfar would be a much safer place for everybody else."

"Evil to the core, both the alfar and their deranged god will wither away into nothingness when the divine Truth is revealed to them, via sharp Mercian steel."

"The alfar may be small-statured, but they are elusive, and their weapons have a nasty sting. In fact, an adult alfar is one of the most challenging prey-creatures a hunter can face."

"When I catch those nasty little batlings that stole our food, they will get the thrashing of a lifetime!"